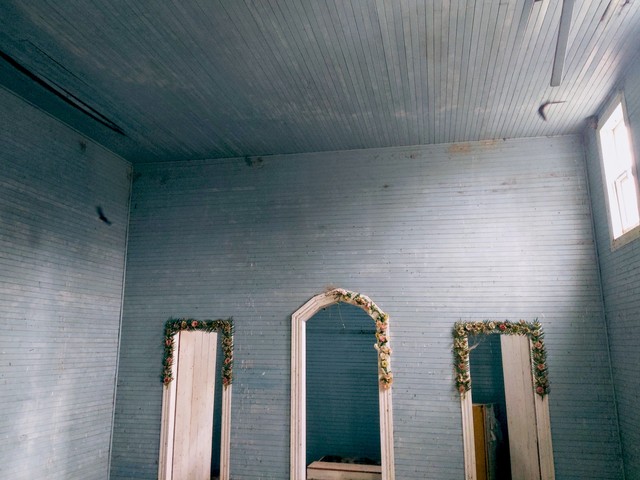 My first sighting was a small white structure in the near distance poking out from the aspen brush. It slowly turned into a belfry as I approached. Birds were already on my mind, having seen, on the northern side of the Qu’appelle Valley, a hunting hawk hover and dive into the ditch. And, on my way from Esterhazy, taking a break from a Catholic ritual and pilgrimage, I saw pairs of ravens sunning themselves on highway signs.

The white belfry stands to the left side of the entrance to the churchyard, a small enclosed space, about 100 meters squared and held on all sides by aspens bending and whispering in the wind. When I stepped out of the car I was surrounded by the full silence that you can only hear in places far from machines, roads, and long electrical wires. It could well be my memory tricking me, but when I picture the scene I can hear the barn swallows flying in feathery, acrobatic parabolas.

This past summer I worked on a project researching the changing landscape of places of faith in the southern half of the province. Places of faith, a broad category, are changing. Christian places are seeing less attendance while other faith groups, bolstered by population growth or dissatisfaction with the historic hegemony of Christianity, are growing.

The small Orthodox church I visited in August does not properly fit either of these categories. It has not found adaptive re-use like the Artesian or The Bethany have - both former churches now performance venues. Nor is it managing change, like Gravelbourg’s convent. It is in a sort of stasis, shored up by an award winning exterior restoration in 2014. Many small rural churches are like this. They no longer have a congregation, but are too rural, too disconnected, too old, too small, for anyone to purchase them. Many have graveyards, and popular sentiment asks ‘who wants to make a home next to the homes of the dead’? Orthodox churches hold their sacredness longer too. The building is seen as being a holy place whether or not there are regular services.

At the church I took an inventory of what I saw. A broken memorial cross with the date of construction. Similar stones in the graveyard on the opposite side of the plot; black Cyrillic words on white crosses. The built aspects of the site - church, belfy, graveyard - are huddled on the east and west ends, almost in the eaves of the woods. The centre of the yard is open, mowed, grass. My overwhelming sensation is being alone.

Poking into the open door of the church I startled several more barn swallows who circled their sanctuary in anxiety. There were two visible nests in the nave, and another couple under the eaves outside. Pausing outside to listen to something rustle in the bushes I heard a fracas over the graveyard. A hawk slid across the graveyard, harried by frustrated swallows.

Western ideas divide themselves into dichotomies (Garneau 164). Pairs of opposites: good/evil, object/subject, alive/dead, nature/culture. Barn swallows are nature, churches are culture. However, standing so alone in that churchyard, I was not so sure that that church belonged to anyone but the barn swallows, the mushrooms, the aspens, the yarrow, the mice. In a regular assessment of this site the barn swallows would not be considered part of the site or stakeholders in it. But why not? Barn swallows are currently considered “Threatened” in Canada, as are many of the pollinators the barn swallows hunted above the graveyard.

Across Canada there is an ongoing question about what to do with these churches, categorized by some (myself included) as ‘redundant,’ (meaning they are no longer needed for church services). Almost every old church site I visited had perfectly mown lawns around the graveyard, and this is helpful, respectful, and keeps from losing gravestones in growing vegetation. It shows people watch these places, they care. But the churchyard, an unused piece of prairie, has the opportunity to be allowed a bit of freedom. If no one else is regularly using the land letting the grass grow long won’t hurt, and will only help provide hunting ground for at risk wildlife. The barn swallows and their peeping chicks did not find the church redundant.

This is not really adaptive reuse, nor is it managing change. If anything it is making the site fallow - letting it wait. But it still fits within the Standards the Guidelines for Historic Places in Canada: minimum intervention, minimal change, reversible. With continuing and continuingly drastic changes to both the built heritage landscape and the physical landscape it is worth considering who we are preserving our heritage for, and who we include in that world.

As I left I took a second to watch the barn swallows again. They continued their hunt, not seeming to care at all, perhaps happier for my leaving.