Especially given that 2017 marked the 150th anniversary of Canadian Confederation, Heritage Saskatchewan was thrilled to administer the Young Citizens contest in this province as part of this past Heritage Fairs season. (Canada’s History Society, with sponsorship from Great West Life/Canada Life/First Life/London Life as well as from the federal government, has run this contest nationally since 2014.) Thirteen students, chosen from our Regional Heritage Fairs Saskatchewan, submitted videos this year.

There were lots of interesting topics that our Young Citizens finalists taught us about this year – among them were the 100th anniversary of 4-H clubs in Saskatchewan, several family immigration stories, the pioneer Jack Hitchcock, the National Ballet of Canada, and the Canadian Pacific Railway. (Check them out on Canada’s History’s website! Also available are videos from 2014, 2015, and 2016.)

Our 13 videos were posted online mid-June and the public was invited to vote for their favourites. Two winners from each province and territory won the grand prize of a trip to Ottawa to participate in the 4th Young Citizens Forum Oct. 29-Nov. 1, 2017. 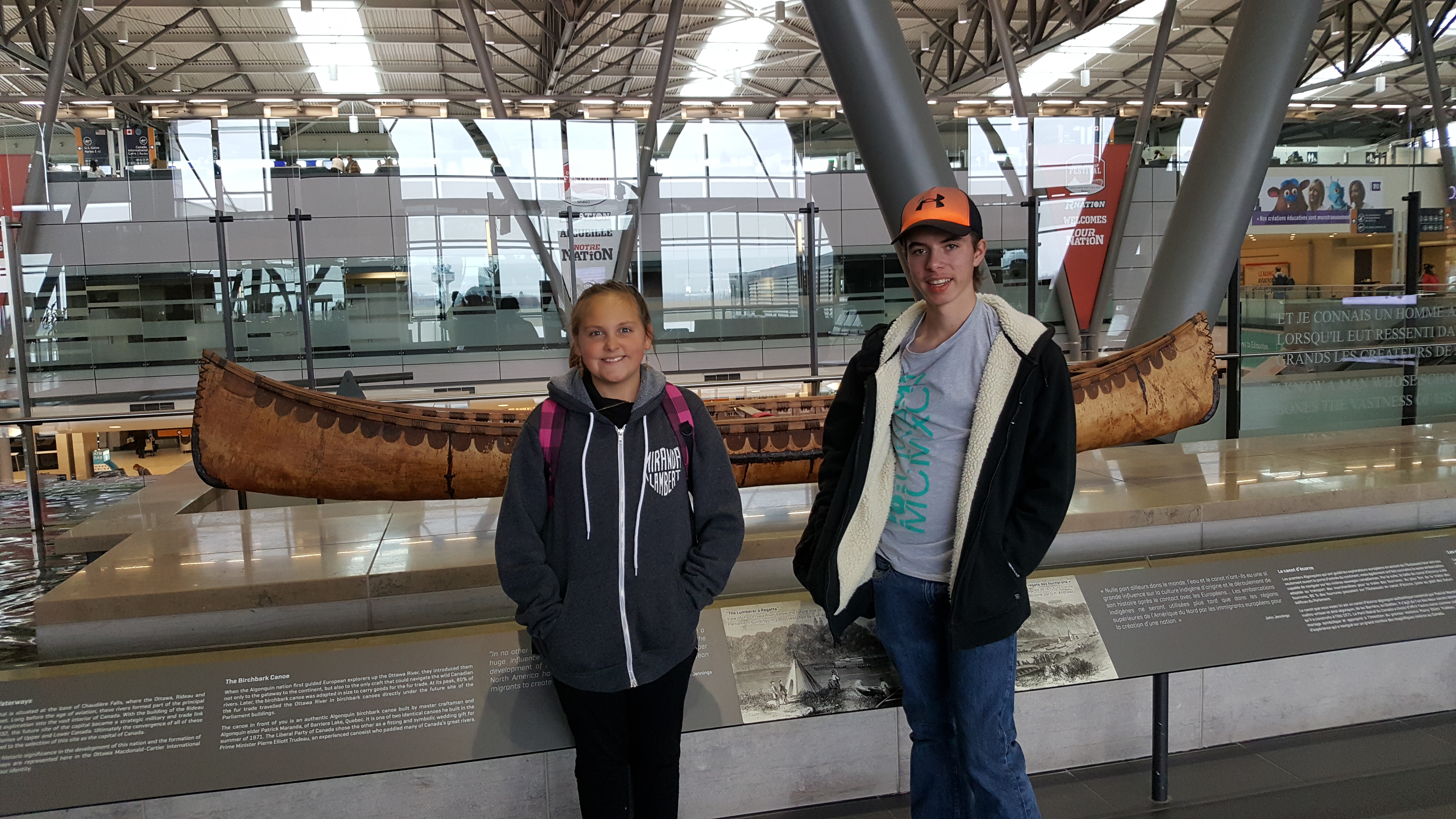 Saskatchewan’s 2017 winners were Ethan Done (for his video The Klondike Gold Rush) and Daysha Garner (for her video INCA / CNIB). Ethan is now in grade 9 at Tommy Douglas Collegiate in Saskatoon, while Daysha is now in grade 6 at École Centennial School in Regina. Congratulations once again!

I returned to Ottawa as the chaperone from Saskatchewan for the fourth time and once again had the opportunity to meet with my various counterparts from other provinces and territories. I was also able to present our new Heritage Fairs promotional video and talk about the wonderful year we had in Saskatchewan, including our new Regional Fair hosted by the Saskatoon Tribal Council. Another important part of our national coordinator meeting was to discuss plans for the future, but more on that later.

Ethan, Daysha, and I – along with Sunny the Owl (our Heritage Fairs mascot) – headed off to Ottawa on Oct. 29. We arrived amid rain that alternated between drizzling and pouring, but we still had an exciting tour of the Parliament Building. The students met counterparts from across the country, which is a difficult thing to do when we are usually so geographically dispersed.  We all had a great time getting to know each other and sharing our common love of history and heritage. We learned more about what makes us Canadians, especially our institutions, and had a lot of fun exploring! (Sunny especially!)

This year, as part of Canada 150, the students created a video that Canada’s History Society will release around the end of November. The video commemorates their experience in Ottawa and shares their perceptions of Canada’s past, present, and future.

(Sunny and I did not get to participate in the filming, so we are very excited to see the finished version!)

As have our six previous Young Citizens winners, Ethan and Daysha were wonderful young ambassadors for our province. The trip was an unforgettable experience: we got to visit the Parliament Buildings, the Bytown Museum, the Canadian War Museum, the Canadian Museum of History, Rideau Hall, the Byward Market, and (specially for this year) trick-or-treating at and around Rideau Hall!

Ethan and Daysha also got the chance to meet Sheri Benson, Member of Parliament for Saskatoon West (Ethan’s home riding).

The students were honoured at the Canadian Museum of History with certificates and we all got to view a compilation of video-clips from their winning videos. There was a variety of topics, some of which were very personal and local, while others were about the broader history of Canada.

The students also participated in a group activity about imagining the future of Canada and a survey about the study of Canadian history. While these activities were less exciting than the tours or trick-or-treating, they were important both for the students (to reflect) and for educators for the future. Hopefully, the students will be able to take what they learned and apply it as they continue through school.

What I have truly appreciated most about the Young Citizens program has been the fact that it is a unique opportunity for students from every province and territory to get the chance to meet each other and spend time together. Most of us rarely get the chance to visit and get to know the different regions of Canada, and it is thus easy to fall into using stereotypes and absorb ideas that we hear around us about people from other parts of the country. On this trip, students meet their fellow Canadians. Provinces and territories have names and faces now. Where else would we get students (and chaperones) from Saskatchewan, Nova Scotia, PEI, and the Yukon trick-or-treating together?

It is easy to get caught up in the past – and the present, to a lesser extent, when discussing heritage, but equally important is our vision for what we want Canada to be and how we picture ourselves and our fellow Canadians within it. All of us on this trip, chaperones and students, returned home with a renewed appreciation for our shared Canadian heritage as well as our diversity, our democratic institutions, and our evolving identity. There was plenty of time to dwell on (and revel in) the past, to focus on our country’s future, and to just hang out together and have fun.

Now for the news about 2018! At our coordinators’ meeting, we discussed the future of the Young Citizens program, and there is a lot of enthusiasm for it to continue. However, funding is not certain and there is pressure to a) reach more students; and b) focus more on the content and less on the technology aspect. Canada’s History came up with several ideas – depending on levels of funding – to modify the program and get it out into the Provincial/Territorial and Regional Heritage Fairs throughout the country. Should funding be secured, Canada’s History would provide discussion questions for the students that they would then use to create their videos, but that all students would get the chance to have the discussion, rather than just a few selected from the Regional Fairs. Thus, there will still be a video contest and ideally 26 students will be able to go to Ottawa next fall, but that is not confirmed. If funding is not secured, fewer students would be able to travel to Ottawa.

So, in the spirit of onward and upward, Heritage Saskatchewan will take some of Canada’s History’s ideas into consideration for our Provincial Heritage Fair – namely incorporating discussion into the agenda of judging, tours, and activities. We will also once again select students during the Regional Fairs season to create videos.

Thank you again to Canada’s History for running the Young Citizens program, as well as all of the parents, volunteers, and teachers. Thanks especially to Ethan and Daysha for representing Saskatchewan so well to the rest of the country!

Regardless of what happens at the national level, our 2018 Heritage Fairs season will begin soon! The Regional Heritage Fair committees are already hard at work on the preparations!

Registration for teachers opens on our website on December 1, 2017, and will remain open until February 5, 2018. (This is for teachers to register their schools/classrooms so that we have an idea of how many students in total are creating projects and can determine how many students from each school can attend the Regional Heritage Fairs.) Students who wish to participate, but whose school is not participating, can also be registered independently and assigned a local school fair to attend. The deadline to register independently is also February 5.

As of November 2017, we have four of our Regional Heritage Fair dates confirmed:

The Saskatoon Tribal Council Regional Heritage Fair date is not yet confirmed, but will take place in late April or early May of 2018.

Last year, we had over 3400 students create Heritage Fair projects. Of those, I got to see 400 of them at the Regional Fairs. I look forward to seeing another 400 new projects in 2018, learning more about Canada’s Living Heritage, and hearing more stories from our students!